Thirty-five people, each symptomatic and clinically positive for Hepatitis C infection, and displaying
elevated AST & ALT Liver enzymes and RNA PCR Viral counts, were tested at regular intervals over a six month
period, to determine any changes in these values, while taking one packet of BioPro-Plus™ per day. Other
inclusion criteria were: no significant co-infection and no other current treatment for Hepatitis C was permitted or given. Of the thirty-five people enrolled, twenty-seven completed the trial and the data gathered was statistically analyzed. Twenty-five of the participants reported significantly increased energy levels and a much-improved feeling of overall wellness. Five participants demonstrated no clinical improvement.

Overall the study results were highly significant and the p-value indicates that the results were not due to chance
alone or due to experimental effects.

Hepatitis C has an incubation period of 15 to 150 days before the onset of clinical symptoms. Early
symptoms are commonly fatigue and jaundice. The majority of cases, even those that develop chronic infection, are
asymptomatic. In 60 to 70 percent of infections, 10 to 20 years may pass between infection and the onset of
symptoms. Once symptomatic, the virus can cause deterioration of liver function, cirrhosis, and liver cancer and may be a pathway for opportunistic co-infection. There are perhaps 3-4 million people diagnosed with Hepatitis C in the United States and maybe that many more not yet diagnosed because of the long latency period. World wide it is
estimated that as many as 170 million people are infected.

BioPro-Plus™ is a unique nutritional supplement containing biologically active thymic proteins ranging in
atomic weight from 10,000 to 50,000 Daltons, plus zinc gluconate. Thymic proteins have been shown to stimulate
mature lymphocytes and enhance a cell mediated, highly specific immune response to virus. The proteins contained
in BioPro-Plus™ are purified from calf thymus and triturated with the zinc gluconate into a base of
Maltodextrin, then sealed in packets containing approximately 400 mg. of product. BioPro-Plus™ is available
over the counter in boxes of 30 packets and is taken one packet per day, or as recommended by a health care
practitioner.

RNA PCR measurements are commonly used to diagnose Hepatitis C, and elevated ALT and AST liver enzymes are
common symptoms of active Hepatitis C infection. The purpose of the study was to determine if BioPro-Plus™
has biological activity by demonstrating a cell mediated immune response as measured by a reduction in RNA PCR
and concurrent reductions in ALT and AST levels in Hepatitis C infected people.

This study was conducted as a Proof of Concept- Open Label Pilot Study only. Thirty-five people
meeting the inclusion criteria were recruited from the customer base of BioActive Research, the manufacturers of
BioPro-Plus™ to participate in the study for six months. Each volunteer was supplied enough product to take
one packet per day at no cost. Each participant was required to obtain a baseline, 3 month and 6 month blood test
measuring AST, ALT and RNA PCR from their regular health care provider. The blood test results were transmitted
to BioActive Research for compilation and statistical analysis. AST and ALT levels were tested before treatment
and at 3 and 6-month intervals, RNA PCR levels were measured before treatment and at 6 months.

The participants were not otherwise monitored and were requested to forego any other Hepatitis C treatment during
the six-month study period.

Results – Of the thirty-five participants enrolled, twenty-seven completed the study. No one reported any adverse
side effects. The accompanying table and graphs illustrate the statistical significance of the reductions in AST, ALT and RNA PCR. Although this was a non-blinded pilot study, the purpose of the exercise was to demonstrate that
BioPro-Plus™ is a biologically active product that can stimulate cell mediated immunity. The accompanying
analysis indicates highly statistically significant reductions in serological categories with 99 % likelihood that the results were achieved by the treatment and not by chance or due to experimental effects. 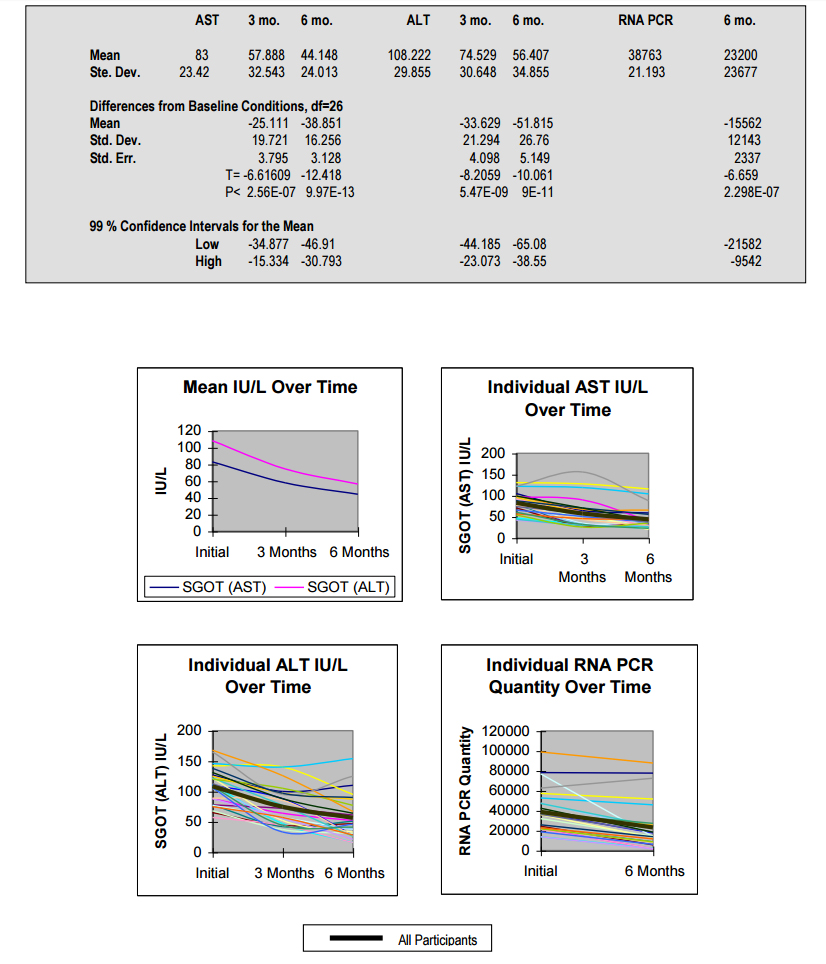