Where Are The Last Uncontacted Tribes On Earth, And Why Haven’t We Made Contact? 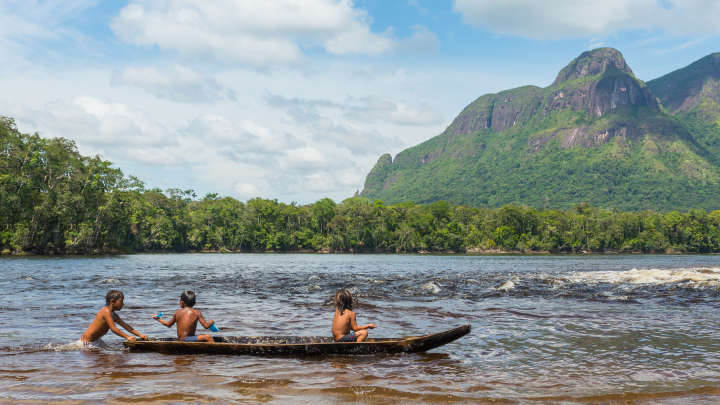 The world may be more interconnected than ever before, but as of 2013, there were still hundreds of uncontacted tribes hiding out in the world.

It’s fascinating to think that these small groups of people are completely unaware of the Moon landings, nuclear weapons, the Internet, David Attenborough, Donald Trump, Europe, dinosaurs, Mars – not the planet nor the chocolate bar – the Rolling Stones, David Bowie, and Darth Vader. All they know is their immediate environment, and that’s pretty much it.

There are likely several out there that are yet to be discovered, but for now, let’s take a look at some of those we’re aware of – who they are, where they are, and why they remain in isolation.

Although it’s a bit of a fluid term, we’re defining an “uncontacted tribe” as a group of people that have had no substantial direct contact with modern civilization. At most, they’ve seen glimpses of a helicopter or an airplane, or have chased off any curious modern people.

Many have briefly met with civilization since the conquest of the New World began in earnest, often with ironically uncivilized results.

Hundreds of kilometers east of India lies the Andaman Island archipelago. Around 26,000 years ago, during the last glacial maximum’s heyday, a land bridge between India and these islands protruded from the shallow sea, and curious humans decided to cross it before the bridge slipped below the waves once more.

Undisturbed for millennia, contact with the outside world began in the 18th century, which almost proved to be their downfall: The Andamanese peoples were almost wiped out by disease, violence, and invasion. There are only about 500 left today, and at least one tribe, the Jangli, are now extinct.

The Sentinelese, however, have resisted making contact. Living on the North Sentinel Island, their language remains unintelligible and very little is known about them. These diminutive people do not appear to be able to make fire, nor grow crops of any kind, and they survive by hunting, fishing, and gathering edible plants.

It’s not known precisely how many are alive today, but it could be as many as a few hundred to as few as 15. The 2004 tsunami that killed around a quarter of a million people around the region also slammed into the islands, but it appears that they have survived the event.

Back in 1880, the British authorities planned to kidnap a member of the tribe, treat them well in captivity, and then release them back to the island in an attempt to demonstrate benevolence.

They captured an elderly couple and four children; the couple died from diseases they were not immune too, but the younglings were given presents and sent back to the island. Upon doing so, they disappeared into the jungle, and the tribe wasn’t seen by the authorities again.

In the 1960s and 1970s, Indian authorities, soldiers, and anthropologists have attempted to make contact on several occasions, but the tribespeople often ran and hid inside the jungle. During one incident, several researchers were cornered by armed, hostile tribesmen that only de-escalated when what appeared to be a community mating ritual took place.

Ever since, expeditions have been met with either threats of violence or attacks with bows and arrows, some of which have ended in the deaths of the intruders. They remain some of the most isolated people on Earth.

The Uncontacted Tribes of Brazil

Vast areas of the Brazilian Amazon – particularly in the depths of the western state of Acre – are home to as many as 100 uncontacted tribes, as well as several others that have either willingly made contact with the outside world or those that were slaughtered at the hands of drug traffickers or gold miners.

As has been often witnessed throughout recent history, respiratory diseases common in modern society can quickly wipe out entire tribes. Since 1987, the official government policy is to not make contact with tribes unless their survival was imminently in peril.

Very little is known about these isolated groups, but they are all distinct tribes with different cultures. They tend to avoid contact with anyone attempting to make contact, primarily because of previous encounters that have proved to be disastrous. Some conceal themselves within the forests, whereas others defend themselves using spears and arrows.

Several are nomadic hunter-gatherers, like the Awá. which makes protecting them from outside influences all the more difficult. They’ve been threatened by illegal logging, but recently the Brazilian government sent in troops to clear them out. Although they have arguably been contacted by journalists, and their language is at least partially understood, it’s likely there are many more tribes with similar lifestyles in the region that have never met anyone from the “outside”.

The Kawahiva are another example, but they’re primarily known from what they have left behind as they move from place to place. It appears that apart from bows and baskets, they can use spinning wheels to make string, use ladders to collect honey from bees’ nests, and use complex fishing traps to get most of their protein.

The land they occupy has been granted official protection, and anyone encroaching on this is heavily prosecuted.

Others appear to be more settled; aerial footage shows multiple tribes living in communal houses and planting crops. Many have been hunted down over the years, and it’s known that Rondônia, Mato Grosso, and Maranhão states contain a multitude of dwindling, uncontacted tribes.

One man represents a special melancholy mention simply because he appears to be the last of his tribe. Living deep in the rainforest of Tanaru territory in Rondônia state, this man always attacks anyone that ventures nearby. His language is completely untranslatable, and his former tribe’s culture remains a mystery.

As well as having basic crop-growing skills, he also loves to build holes – either to hide in or to trap passing animals. All that’s known with any certainty is that when he dies, his tribe will be nothing more than a memory.

Other Uncontacted Tribes In South America

Although Brazil is likely to contain the majority of said tribes, others are known to exist in Peru, Bolivia, Ecuador, Paraguay, French Guiana, Guyana, and possibly Venezuela. Overall, very little is known about them compared to Brazil’s.

Plenty are suspected of having similar – but still distinct – cultures to that of the Masco Piro, a nomadic group of Peruvian peoples that have just about survived decades of aggressive deforestation at the hands of rubber industries. Some have even intentionally made contact with authorities after fleeing drug cartels.

Generally keeping away from all other tribes, most are rarely happy to be contacted by Christian missionaries, who are accidentally spreading disease along with the Gospel. Most, like the Nanti, are now observed only via helicopter.

The Huarorani people of Ecuador are linked by a common language, one that doesn’t appear to be related to any other in the world. Once a hunter-gatherer peoples, they have become permanently settled in the last four decades in fairly advanced housing between the Curaray and Napo rivers in the east of the country.

Many have since made contact with the outside world, but several communities have rejected this, and instead keep moving to areas unaffected by contemporary oil exploration. The Taromenane and the Tagaeri number no more than 300 or so, and are sometimes killed by loggers looking for valuable mahogany wood.

The situation is similar in nearby nations, where only certain segments of tribes – like the Ayoreo of Bolivia, the Carabayo of Colombia, and the warfare-heavy Yanomami of Venezuela/Brazil – remain completely isolated and continuously avoid contact with the modern world.

The Uncontacted Tribes of West Papua

The western section of the island of New Guinea is home to about 312 tribes, 44 of which are uncontacted. The mountainous region is covered in thick, viridian forests, which means that it’s likely that we haven’t spotted them all yet.

Once again, contact is avoided either peacefully or aggressively by many of these tribes, primarily because of their treatment by the Indonesian government. Plenty of human rights violations since they arrived in 1963 have been documented, including murder, rape, and torture.

The tribes are generally split into two varieties. Those that live along the coast wander through swamps and survive by hunting, gathering, and fishing. In the central region, which is at high elevation, pigs are farmed along with sweet potatoes.

Little else is known with regards to those that have yet to make official contact. Apart from the difficult terrain, researchers, human rights organizations, and journalists are also banned from exploring the region by the authorities.

It’s possible that there are uncontacted tribes still hiding out in other densely forested parts of the world, including Malaysia and parts of central Africa, but this is deeply uncertain. If there are, though, it may be best to leave them alone. After all, as should be overwhelmingly clear by this point, uncontacted tribes are mostly threatened by the outside world. This article merely hints at what many have experienced.

If you’d like to learn what you can do to help prevent their extinction, we’d recommend checking out the rather marvelous non-profit organization Survival International, whose staff are working around the clock to make sure they get to live out their lives in peace.