The Role a Healthy Immune System Plays in Cancer Prevention 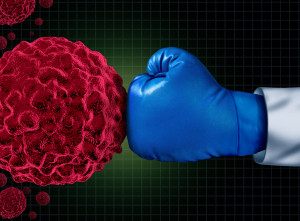 Cancer isn’t a single disease. It’s a general term used to describe cells that lose their ability to regulate growth. Rather than growing in an orderly and controlled manner like a healthy cell, cancer cells divide quickly, cloning themselves in an unregulated fashion. As cancer cells grow they become masses of tissue known as tumors. To make matters worse, some cancerous cells have the ability to migrate to other tissues and into the lymphatic tissue and bloodstream where they travel to distant parts of the body.

Is cancer a preventable disease? Each day, you’re exposed to cancer-causing chemicals in the food you eat and in the environment. Some foods contain heavy metals like cadmium that are linked with cancer. Cigarette smoke and radon inside some homes are another source of cancer-causing pollutants that enter the lungs. Even sunlight releases ultraviolet radiation that’s linked to skin cancers.

Certain viruses, like the human papilloma virus involved in cervical cancer, play a role in the development of some cancers. These are only a few of the known carcinogens, or cancer-causing agents, which are known. It’s likely that many more exist that haven’t been identified yet.  You can’t completely protect yourself against these carcinogens unless you live in a bubble, but you do have one defense: a healthy immune system.

A healthy immune system is the first line of defense against viruses and bacteria, but it’s also important for recognizing and destroying cancer cells. In fact, researchers in the field of cancer immunology are looking at new ways to encourage immune cells to better fight cancer.

What role does the immune system play in cancer prevention? According to one theory, a healthy immune system is involved in “immunosurveillance,” the process of recognizing abnormal cells like cancer cells. Once immune cells in the blood stream called lymphocytes recognize the abnormal cell, they call in back-up help. A number of different types of immune cells (natural killer cells, dendritic cells, macrophages, CD4 cells, CD8 cells) work together to destroy the abnormal cells. Each immune cell plays its own special role in vanquishing cells they see as abnormal.

Of particular importance for immune health are CD4 and CD8 immune cells. CD4 cells are referred to as “helper cells.” It’s their job to alert the CD8 cells, known as killer cells, that there’s an abnormal cell or other threat. Once alerted, the CD8 cells are mobilized to wipe out the foreign invader.

CLICK HERE TO GET BIOPRO-PLUS SUPPLEMENTS TO NATURALLY HELP YOU FIGHT CANCER!

The Role of the Thymus Gland

CD4 cells get a little help from a gland called the thymus gland. The thymus gland produces proteins called thymic proteins that prepare CD4 cells do their job. Without healthy CD4 cells, CD8 cells can’t be mobilized to fight foreign invaders and cancer cells. Unfortunately, the thymus gland begins to shrink in size and its tissue replaced with fat after puberty. By late middle-age, the thymus is about 15% of its original size. Along with a decline in size comes decreased function. An older thymus gland can’t produce the same amount of thymic proteins that it did during youth. As a result, an older person’s immune response is less robust.

No doubt the immune system plays a vital role in keeping cancer cells in check. Aging and other factors, including stress, can reduce normal immune function and increase the risk for abnormal cells gaining a foothold. Don’t underestimate the importance of a healthy immune system!